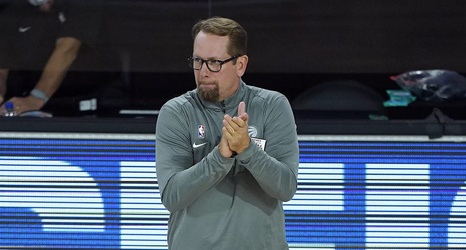 The NBA has announced that Toronto Raptors head coach Nick Nurse is one of the three finalists for its annual Coach of the Year award.

Nurse has been considered a front-runner for the award for some time, based on the excellent job he’s done leading the post-Kawhi Leonard Raptors to a 46-18 record (pre-Bubble — Bubble statistics and records aren’t taken into consideration for this year’s awards). That record is well above expectations for a team that lost the Finals MVP and its starting shooting guard, and that, combined with Nurse’s constantly shifting defensive schemes and equal-opportunity offense, should be enough to land him the award, at least in our opinion!