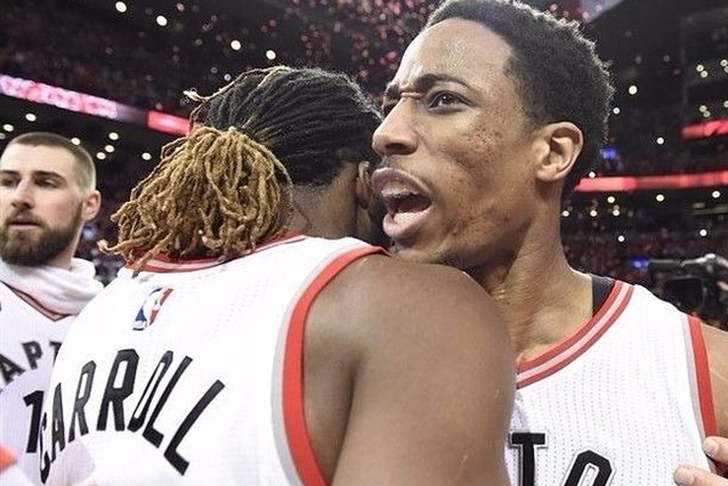 Just when it looked like the Toronto Raptors were going to blow another game with a lackluster fourth quarter, they turned it on in the last few minutes to pull out the 96-92 overtime win over the Miami Heat. The series is now tied 1-1.

Toronto was able to open up a double-digit lead on the heels of a 17-3 run in the first quarter, and they were able to hold onto that advantage, leading Miami 48-41 at the half. However, the Heat took the lead back with a 13-2 at the end of the third quarter and started to run away with the game.

They led by six points with four minutes left, then the Raptors suddenly caught fire out of nowhere, going on a 10-0 run to build a four-point lead. But, as we've learned with these two games, the game was far from over.

Dwyane Wade hit a three-pointer with 30 seconds left to cut the lead to one, but Lowry's jumper with 15 seconds left pushed the lead to three, but another three from Goran Dragic tied the game again with 10 seconds remaining, forcing overtime for the second straight game.

Toronto then scored the first six points in the extra session, and the Heat were never able to recover.

Miami was led by 20 points from Dragic, while both Joe Johnson and Wade had 17. Hassan Whiteside also contributed a big double-double with 13 points and 13 rebounds.

DeMarre Carroll led Toronto with 21 points, while DeMar DeRozan had 20 and Kyle Lowry chipped in 18. Jonas Valanciunas also played a big role down the stretch with 15 points and 12 rebounds.