Blue Jays: Weighing the long-term vs. the short-term with defence 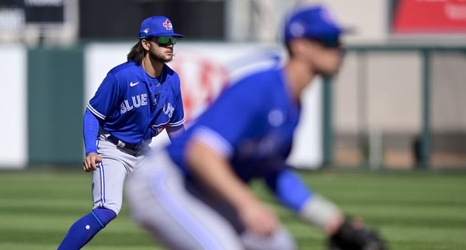 LAKELAND, FLORIDA - MARCH 04: Bo Bichette #11 and Cavan Biggio #8 of the Toronto Blue Jays await the play during the fourth inning against the Detroit Tigers during a spring training game at Publix Field at Joker Marchant Stadium on March 04, 2021 in Lakeland, Florida. (Photo by Douglas P. DeFelice/Getty Images)

If the Blue Jays wanted to improve their infield defence right now they might consider shuffling some positions around. That said, it’s not all about right now.

It’s certainly too early to overreact to what we’ve seen in over the 11 games this season, but there’s no denying that that there are a few glaring weaknesses thus far.