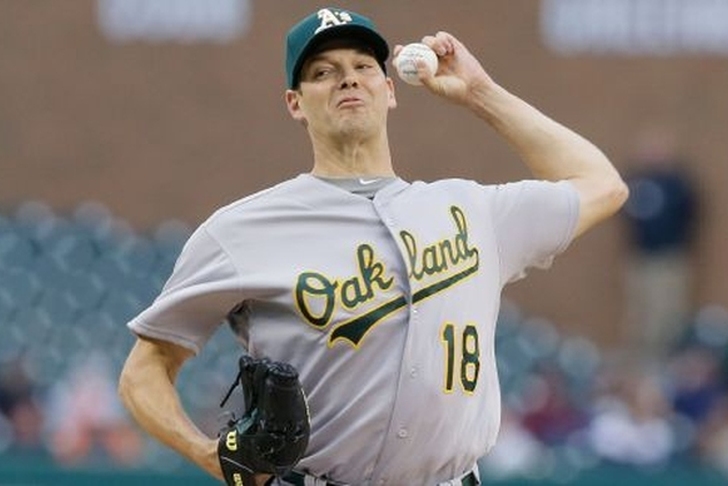 The MLB trade deadline is tomorrow, and there are plenty of trade rumors swirling around the Toronto Blue Jays. They are 59-45, giving them the AL East lead. Since they are in the midst of a playoff race, the Blue Jays are likely buyers at the deadline. With that in mind, here all the latest Blue Jays trade rumors below.

Blue Jays interested in Oakland duo
Toronto has contacted the A's to talk about acquiring either pitcher Rich Hill and/or outfielder Josh Reddick, according to FOX Sports' Ken Rosenthal:

Reddick doesn't seem like a realistic option given the Blue Jays just traded for Melvin Upton Jr., who is already their fourth outfielder. Reddick would be their fifth.

Hill, however, would be Toronto's starting rotation a big boost. He is 9-3 with a 2.25 ERA in 14 starts this season, though he is currently on the disabled list with blisters on his throwing hand.

Toronto aggressively looking to add starting pitcher
The Blue Jays are expected to send breakout star Aaron Sanchez to the bullpen down the stretch due to an innings limit, and they need to replace him in the rotation. Hill seems to be Toronto's top target, but they are casting a wide net and going after whoever they can, according to ESPN's Jayson Stark.

Last year at this time, the Blue Jays solved their rotation problems by making a franchise-changing deal for David Price. So if they could just pluck an ace out of the sky again this July and plug him into Sanchez's spot in the rotation, boy, would they save themselves a lot of second-guessing. Not to mention first-guessing.

Except there's no sign they're on the verge of trading for, say, Chris Sale. So Plan B is to trade for, well, pitching -- probably a starter, possibly a reliever. But Atkins is adamant that he can't let the Sanchez decision weigh too heavily into whatever deals his team makes in the next few days.

"I do think that starting pitching is going to be harder to find," he went on. "But even if it would be our preference to have that, we're not going to let Aaron Sanchez factor into that decision."

Nevertheless, other clubs report that the Blue Jays have been one of the most aggressive teams in hunting for a starter in recent days. They've been linked with all sorts of names, ranging from the usual suspects (Rich Hill, Andrew Cashner) to some you'd never see coming (CC Sabathia?). One name to keep an eye on is Philadelphia's Jeremy Hellickson, who at least could provide reasonably dependable innings, for a return they could probably afford.