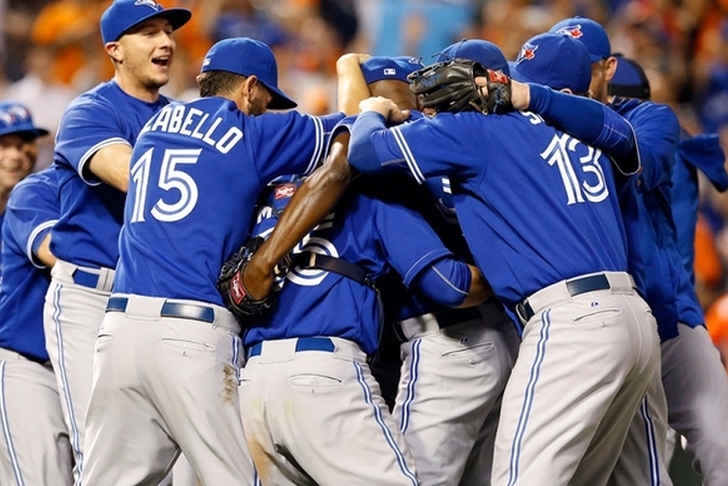 The Toronto Blue Jays have fought all year long to return North-of-the-Border baseball to a position of relevancy. They almost literally fought today in a heated 6-3 ALDS Game 5 win over the Texas Rangers -- a win which propels them to their first American League Championship Series since 1993.

Down 3-2 in the bottom of the 7th, Toronto took advantage of three Rangers errors to load the bases on Rangers starter Cole Hamels. A Josh Donaldson fielder's choice would tie it before a three-run moonshot by Jays slugger Jose Bautista's gave Toronto the lead for good, 6-3.

Bautista's pronounced stare and bat flip after his home run irked Rangers reliever Sam Dyson -- so much so that he confronted Bautista's teammate, Edwin Encarnacion, after what Dyson appeared to think was excessive celebration prior to coming into the batter's box. Benches cleared there and cleared again following a Troy Tulowitzki foul out when Tulo and Dyson exchanged words.

All of this craziness followed yet another bizarre moment where a throw by Toronto catcher Russell Martin clanged of Rangers hitter Shin Soo Choo's bat in the batter's box, allowing Rougned Odor to score from third. Trash littered the field as umpires ruled Odor's run to be valid, temporarily giving the Rangers a lead at 3-2 in the top of the 7th.

However, a late Blue Jays rally would ignite the Toronto crowd as the Blue Jays finished off their first playoff series win in 22 years.