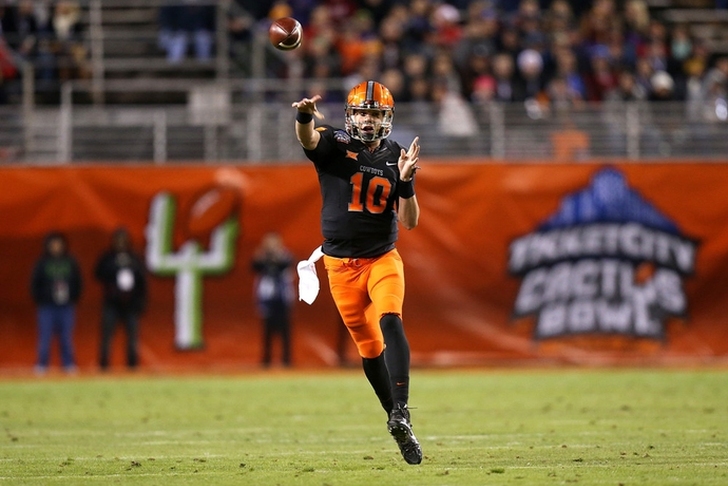 Analysis: This is the first bowl game of the season that actually pits ranked teams against one another and really the start of the high-profile postseason matchups. In my opinion Oklahoma State is by far the stronger team in this game and they should win this one by double-digits. Early in this season the Cowboys were on the short list of teams vying for the college football playoffs. But a late swoon, with losses to Oklahoma and then to Kansas State, submarined them and helped them land in this bowl game. However, that doesn’t do anything to diminish the fact that the Cowboys have one of the most dominating offensive forces in the game. They have the No. 1 passing attack, were No. 2 in total yards, and were No. 3 in points scored this year, averaging nearly 600 yards and 46.2 points per game. Virginia Tech won’t stop them. The Hokies have a Top 15 defense and they were No. 5 in the country in points allowed this year (13.5). And normally I am all about great defense beating good offense, especially in a quintessential offense vs. defense matchup like this. But there is no way that’s the play in this instance and I think the talent and experience discrepancies are too much for Tech to overcome. This game will be in Orlando so weather won’t be an issue. And, frankly, despite its rankings Virginia Tech hasn’t proven that it can stop the top offenses it played this year, allowing 31 points to Clemson and 28 to Miami and Georgia Tech. Further, Virginia Tech really didn’t beat anyone this year, losing to those three aforementioned teams and winning a bunch of games over the dregs of the ACC. Oklahoma State’s defense was No. 27 against the run, so they can bow their backs a little. And the Hokies don’t have a passing game that will be able to keep up when this one becomes a shootout. Oklahoma State was more impressive against two common opponents – West Virginia and Pittsburgh – and I think the Cowboys are a better team than their ranking belies. The Cowboys are 5-0 ATS in their last five nonconference games and they are 5-2 ATS in their last seven games on neutral sites. I thought this line should’ve been closer to a touchdown. And I think that the Cowboys will end up winning this one somewhere in the 34-23 range. Doc’s Sports provides predictions and matchup reports on every single bowl game here.

Offensive Statistics: Virginia Tech
The Virginia Tech Hokies have run for 2,006 yards as a unit, which ranks 63rd in the nation. They've run 533 times, averaging 3.8 yards per rush as a unit. The Hokies have been penalized on offense 55 times for 484 yards so far this year, which has them 112th in the country in penalties. They are 63rd in Division 1 in points scored with 346. They have run 901 plays this year for 4,849 yards, which ranks them 63rd in the nation in total offense. The Hokies average 5.4 yards per play, which is 91st in college football. As a team they have accumulated a total of 257 1st downs this season, ranking them 51st overall as an offensive unit. Josh Jackson has completed 214 throws while attempting 355 passes for a completion percentage of 60.3%. He has passed for 2,743 yards this year. He averages 7.8 adjusted yards per throw and 7.7 yards per pass attempt. His quarterback rating this season is 138.3.

Defensive Statistics: Virginia Tech
The Hokies rush defense has given up 431 attempts for 1,426 yards this season, putting them in 15th place in the country against the run. They have had 78 penalties for 606 yards on defense this year. That places them 55th in Division 1. Virginia Tech is 2nd in college football in points surrendered on defense with 162. They have given up a total of 3,664 yards on D, which is 11th in the nation. The Hokies are 15th in yards per play allowed with 4.8. Opponent offenses have completed 152 throws on 325 attempts against the Virginia Tech Hokies defense this season, ranking them 7th and 17th in the country. The Virginia Tech pass defense has also surrendered a total of 2,237 yards in the air, which is 21st overall in total pass defense.

Special Teams: Virginia Tech
The Virginia Tech Hokies have tried 26 field goals this year and made 18, which is 23rd in college football. Their kickers have a field goal percentage of 69%. Virginia Tech Hokies kickers have made 100% of their extra points, going 40 for 40 this season. Their punters have accumulated 2,678 yards on 64 punts, averaging 43 yards per punt. That ranks them 48th in the NCAA in punting average. Virginia Tech is 2nd in the country in punt returns with 38. They've totaled 400 punt return yards and average 10.5 yards per return, which is 29th in D-1. They have returned 20 kicks for 508 yards on special teams, which puts them 115th in kick return yardage. The Hokies average 25 yards per kick return and they are 59th in the nation in all-purpose yards with 5,756.

Offensive Statistics: Oklahoma State
The Cowboys are 4th in Division 1 in points scored with 556. They have run 941 plays this season for 6,947 yards, which ranks them 2nd in the nation in total offense. The Oklahoma State Cowboys average 7.4 yards per play, which is 5th in college football. As a team they have accumulated a total of 335 1st downs this year, placing them 3rd overall as an offensive unit. On the ground Oklahoma State has run for 2,239 yards as a team, which ranks 45th in the country. They've run 470 times, averaging 4.8 yards per carry as a rushing unit. The Cowboys have been penalized on offense 62 times for 572 yards so far this season, which has them 97th in the nation in penalties. Mason Rudolph has thrown for 4,609 yards this season. He has completed 298 passes on 458 attempts for a completion percentage of 65.1%. His quarterback rating this year is 170.9. He averages 10.1 yards per pass attempt and 10.7 adjusted yards per throw.

Defensive Statistics: Oklahoma State
Oklahoma State is 86th in the nation in points allowed on defense with 361. They have surrendered a total of 4,804 yards on D, which is 71st in Division 1. The Cowboys are ranked 58th in yards per play allowed with 5.5. Opposing offenses have completed 242 passes on 418 attempts against the Oklahoma State defense this season, placing them 99th and 106th in the country. The Oklahoma State Cowboys pass defense has also given up a total of 3,222 yards through the air, which is 119th overall in total pass defense. Their rushing defense has allowed 456 attempts for 1,582 yards this year, putting them in 27th place in D-1 against the run. The Cowboys have committed 71 penalties for 558 yards on the defensive side of the ball this season. That ranks them 39th in the nation.

Special Teams: Oklahoma State
Oklahoma State is ranked 77th in the nation in punt returns with 16. They've accumulated 78 punt return yards and average 5.2 yards per return, which is 100th in college football. They have returned 28 kicks for 510 yards on special teams, ranking 114th in kick return yardage. The Oklahoma State Cowboys average 19 yards per kick return and they are 6th in the country in all-purpose yards with 7,535. The Cowboys have attempted 26 field goals this season and made 20, which is 12th in D-1. Their kickers have a field goal percentage of 77%. Oklahoma State kickers have made 100% of their extra points, going 67 for 67 this year. Their punters have totaled 1,639 yards on 38 punts, averaging 43 yards per punt. That places them 34th in Division 1 in punting average.

Robert Ferringo is one of the most well-known and accomplished advisors in the sports information industry. He has over 12 years of experience and has been featured on ESPN, CBS Sports, Esquire Magazine, Football Outsiders and several other prominent publications. Robert is a member of the Football Writers Association of America and the Basketball Writers Association of America and is a well-respected writer along with being an advisor. You can find him exclusively at www.docsports.com.