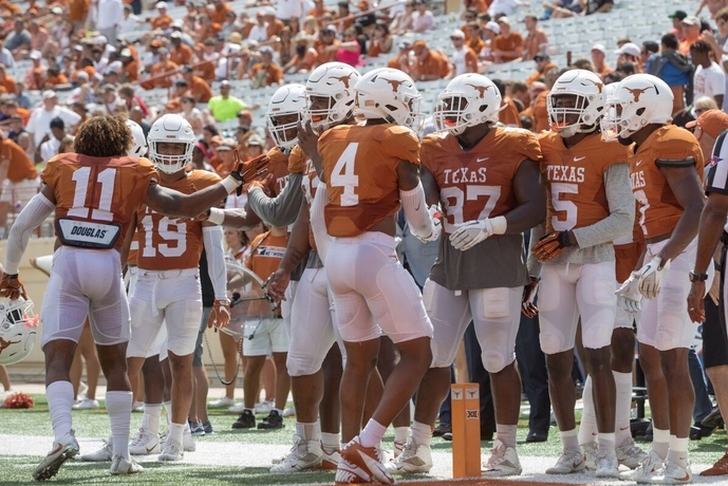 Roach and Ford are the top two starters, while Nelson and Elliott fighting for the other spot. Texas will use a three-down linemen look, and which every three are on the field (likely moving around the line some as well) will need to get pressure. Roach and Omenihu will be relied on the most in that role, as they're the smaller than the other top players. Ford, Nelson or Elliott could line up at nose guard, depending on who is on the field. The pecking order at that spot should be Ford - Elliott - Nelson, with one lining up at the other DL spot. There will be a rotation here, with Elliott and Omenihu likely the first two off the bench.

There's some good talent on the roster on the defensive line, so don't be surprised if there's some serious shuffling before the end of fall practice.

Click Here For The Latest On Texas Football Recruiting

The talent at linebacker has yet to play up to its potential. Hopefully that changes next year, especially with Malik Jefferson. He should be the best defensive player in the Big 12, but hasn't reached that yet. Wheeler actually led the team in tackles, but he'll be pushed by Hager, who has moved from edge rusher to one of the inside LB spots. Hughes will once again be a pass-rushing linebacker, with McCullough behind him. Johnson is a highly-touted JUCO player who has yet to arrive on campus. I'm not sure where he ends up seeing the most snaps, but I do think he'll play. Erick Fowler might not quite be ready to contribute in a big way, but there's potential there.

The top combo appears to be Hill and Boyd, but Davante Davis isn't that far behind and he's a really good third option. However, the trio hasn't played as well as they can. Locke, an apparent favorite of Herman, is the nickel back. There's some intriguing young depth as well, but they likely won't be asked to play much outside of special teams.

The starters at this spot are still unclear. They shuffled last year under Charlie Strong, but my money is on Jones and Elliott getting the starting jobs. However, Hall could very well win a job at either strong or free safety. Bonney can help at nickel corner as well, if needed. But, and perhaps this is me hoping, I'd like to see the two young guys get the starting nods. Fall camp, as it is for nearly every position, will be critical to figuring out the starters.

Follow our Texas Longhorns team page for all the latest Texas Football News or Download the Chat Sports App!