Spurs and Soles: The Shoe Contract in the Kawhi Leonard Drama 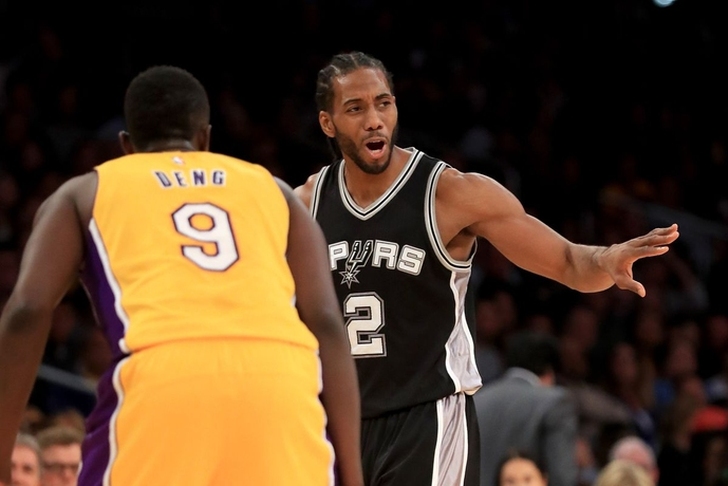 The present state of affairs between the San Antonio Spurs and Kawhi Leonard has the makings of a modern sports tragedy. The Spurs front office are famous for doing everything right, so the apparent fallout between the team and their current (but soon to be former?) franchise player is as sad as it is surprising.

For those just arriving on scene, a brief recap is worthwhile. The Spurs have been remarkably successful in the past 20 years. With head coach and president of basketball operations Gregg Popovich at the helm, the team has won 5 championships, been a perennial contender, and transitioned seamlessly from one franchise player to another.

From David Robinson to Tim Duncan, Tony Parker to Kawhi Leonard, adding all stars like Manu Ginobili and LaMarcus Aldridge along the way for good measure. The Spurs success has been outstanding not only for its results on the court, but drama-free operations off it.

While other championship teams like the Celtics, Lakers, and Cavs have had famous fallouts, the Spurs ‘team first’ culture has not only seen them sustain constant success year by year, but served as a template for other teams.

The culture of San Antonio is so renowned and admired noted hoops fan and former president Barack Obama even said he’d look beyond his hometown Chicago Bulls and sign with the Spurs if he was a free agent. That’s why the breakdown in the relationship with Kawi is so surprising.

Yet it also appears clear there’s more to it than behind the scenes. It’s ugly, rarely discussed, but a growing factor in the NBA. The influence of a sponsor on a star player’s decision. Why a player now injury-free still doesn't want to rejoin the team.

Cities and Contracts
As well as the desire to see Leonard on a court, it’s understood Leonard and his entourage are looking to a new team with a view to sorting a better shoe contract out in turn. Recent months have seen negotiations surrounding a new contract with the Jordan brand stall. That in turn influencing Leonard’s thinking that signing with a big market team will deliver a bigger shoe deal.

The irony of this is market size does not matter a great deal anymore. Sure, playing in New York or LA will get you greater visibility than playing in Minnesota or Milwaukee. Yet, Karl Anthony Towns and Giannis Antetokounmpo,  two of the games most recognized stars, play for the Wolves and the Bucks. Ditto Victor Oladipo in Indiana, and Russell Westbrook in OKC.

Each of these players have a factor Leonard is missing: charisma. Leonard’s results speak for themselves on the court, but off the court he is essentially non-existent as a media identity. If Leonard is anguished about his marketability, the problem in the first is not with San Antonio or his shoes, but him. It also cuts both ways, in event the pressure is being placed upon Leonard by his sponsors.

Fitting the Brand
Sponsorships don't always result in turbulence. Oftentimes it can see a genuine interest of the athlete align with the sponsor’s aim. Trading platform eToro recently sponsored French tennis player Gael Monfils. Gale’s not only a pro athlete but a keen trader, so it’s a natural fit. Usain Bolt’s famously cheeky sense of humor made his sponsorship with Virgin - where he cut an ad mocking its founder Richard Branson - fits well too.

Then there’s the been the cultural phenomenon of famous ads like Charles Barkley’s I’m not a role model, and more recent one’s like Steph Curry’s Make that Old.  Beyond any sponsorship concerns, these are iconic in no small part because they are just plain cool. The issue is when a sponsor begins to diminish the fundamental part of what made a player worth sponsoring in the first place.

Shoes and Spurs
Kawhi Leonard is an incredible basketball player, but he has also been a product of his team’s system. Because the Spurs have so successfully retained their stars like Duncan, Parker, and Ginobli - alongside their newer additions like Aldridge and Mills - there is little in the way of a template here to offer clues to how Leonard may adjust to a post-Spurs basketball existence.  If all goes well, he could be like Shaq going from Orlando to LA. Someone who switched teams and went from strength to strength. If all goes wrong, it could end up like Shawn Kemp. A dominant player in his Seattle days, who became a shell of what he once was for the first of his NBA career.   If these rumors are true Kawai will have to think carefully about whether the shoe fits. The answer to that will confirm whether he can remain a Spur.