With a Second-Half Collapse vs. Indiana, Ohio State Has Allowed Doubt to Creep in 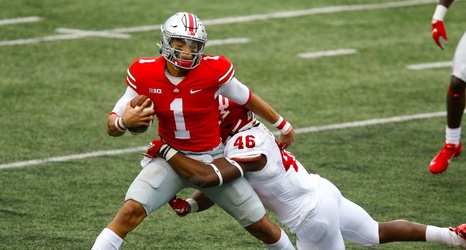 COLUMBUS, Ohio — Early in the third quarter of No. 3 Ohio State’s game Saturday against No. 9 Indiana, I began writing this column. I wrote close to 400 words, in fact.

On the field below me, the Buckeyes were salting away what seemed like another blowout conference victory, up four touchdowns with no real concerns defensively even if there were some offensive hiccups.

I had calculated all of this research to show how wide the gap has gotten between Ohio State and the rest of the Big Ten, how they’ve won 19 straight league games by an average of 25 points, how the Buckeyes have both out-played and out-recruited other league schools in the kind of dominance that will have them somewhat easily cruising to a College Football Playoff spot.