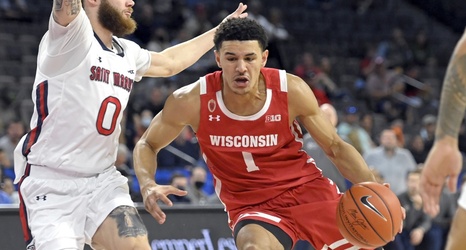 Wisconsin’s time at Maui Invitational couldn’t have started much worse than it did.

Less than eight minutes into the tournament’s opening game, the Badgers trailed by 16 points to a middling Texas A&M team picked to finish 12th in the preseason SEC media poll. Worse than that, Wisconsin looked overwhelmed by a bigger, more athletic Aggies team and its swarming defense.

Yet somehow, a little more than 48 hours later, the Badgers were jumping around on the court to the tune of, well, “Jump Around” with a trophy in hand.

A young Wisconsin team grew up, as coach Greg Gard said, before our eyes this week in Las Vegas, and did so by beating three very different teams with two key ingredients: plenty of poise and Johnny Davis.