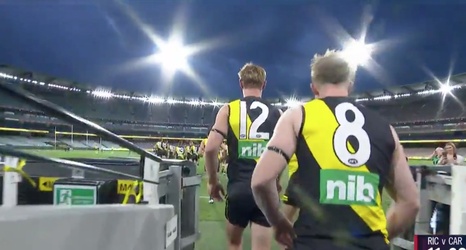 One of the only major sports leagues still in action amid the coronavirus pandemic is the Australian Football League, which opened its 124th season on Thursday night (Australian time).

The league’s first game of the year is traditionally between rivals Richmond at Carlton, at the 100,000 seat Melbourne Cricket Ground. Last year’s game attracted 85,000 fans. More than 90,000 showed up in 2018. This year, attendance was zero.

Bizarrely, the pregame routine went on as if there were fans in the stands. “Welcome to the Jungle” blared from the sound system as Carlton prepared to take the pitch and the club’s song “We Are the Navy Blues” played as the players ran on to the grass.