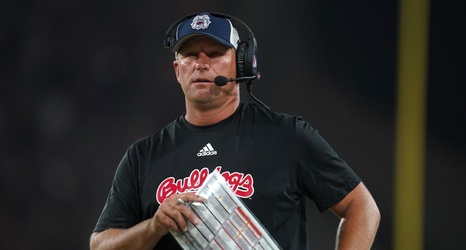 Two weeks after firing head coach Jimmy Lake following the coach's public shoving of a player on the sidelines, Washington has found its new head man.

The Huskies announced the hiring of Kalen DeBoer on Monday, luring the 47-year-old from Fresno State. The move was previously reported to be in the works by ESPN's Kyle Bonagura and Adam Rittenberg.

DeBoer just completed his second season at Fresno State, leading the Bulldogs to a 9–3 record. The team went 3–3 in his first season during the pandemic-shortened 2020 campaign. Prior to his arrival in Fresno, DeBoer was the offensive coordinator at Indiana in 2019, and was previously an assistant at Fresno State, Eastern Michigan and Southern Illinois.