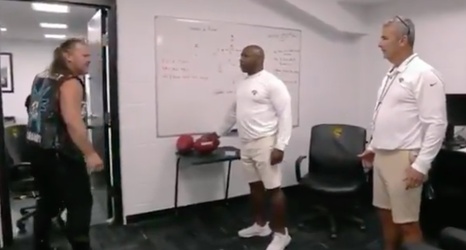 In his first crack at coaching an NFL team, Jaguars coach Urban Meyer will likely aim to instill toughness and fight into a franchise that went 1-15 a season ago. If the former college coach is short on inspiration, he might have gotten some from an unfamiliar source Sunday night.

Meyer and assistant head coach Charlie Strong made cameo appearances in AEW's Double or Nothing event on Sunday, which was held at Daily's Place in Jacksonville. The venue is connected to the Jaguars' practice facility, which might explain why Meyer and Strong were in such close proximity to the action.