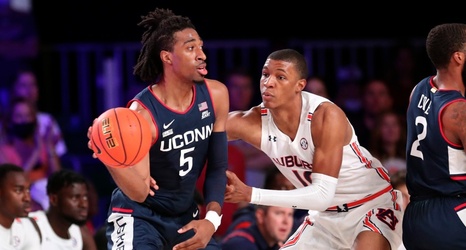 As the final seconds ticked down during UConn's wild 115–109 win over Auburn in double-overtime, the focus from the Huskies bench quickly turned to a more serious manner.

Senior forward Isaiah Whaley collapsed near the bench, immediately drawing attention from those on the sideline and creating a scary scene on the court just as the ESPN broadcast was cutting away to a different game.

Thankfully, Huskies coach Dan Hurley offered a positive update after the game, explaining that Whaley had fainted but was alert, walking and O.K.

After the game, Hurley said that the fainting episode could have been caused by Whaley standing up too quickly, according to Alexa Philippou of the Hartford Courant.