The (Super) Natural: Can Bijan Robinson Lead a Texas Revival? 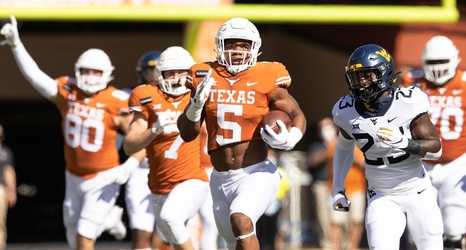 The head coach at Salpointe Catholic (Tucson, Az.) High School chuckles at the memory of seeing Texas’s sophomore running back in the town famous for its alien conspiracy theories following a mysterious 1947 aircraft crash nearby. Robinson’s talent from an early age was, well, out of this world, and Rogers recalls Robinson dominating a flag football contest as an eighth grader. Robinson wreaked havoc on defenses largely as a pass catcher, displaying the speed and agility that landed him a spot on the Associated Press preseason All-America team entering 2021.