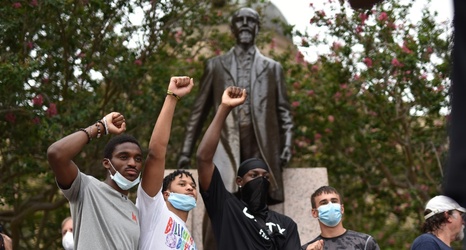 Last Saturday, Texas A&M sprinter Infinite Tucker and linebacker Keeath Magee II were among the dozens of students who marched and protested against the statue of Sullivan Ross, a Confederate general, at the Academic Plaza on the College Station campus. The demonstration was peaceful until tensions escalated regarding the 102-year old statue at the heart of campus.

Two videos surfaced on social media where Tucker is seen knocking pennies off the base of the statue and then getting into an exchange where an older white man, who identified himself to the athletes as Lee Roy, seems to ask Tucker, “Are you an Aggie or a Blackie?