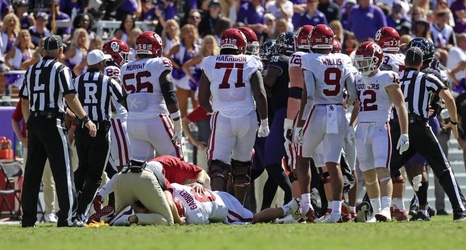 Oklahoma quarterback Dillon Gabriel had to leave the game vs. TCU when linebacker Jamoi Hodge hit him illegally after Gabriel scrambled for yardage. Hodge was penalized for targeting and was ejected from the game for the hit.

Gabriel began his slide, giving himself up on the play, when Hodge hit him hard directly in the helmet. Gabriel walked off the field under his own power but did not return to the game.

Before leaving the game, Gabriel and the Oklahoma offense were struggling to keep up with TCU, who were up 34–10 just five minutes into the second quarter.