Swiatek, the World No. 1, Falls at Wimbledon, Ending a Long Win Streak 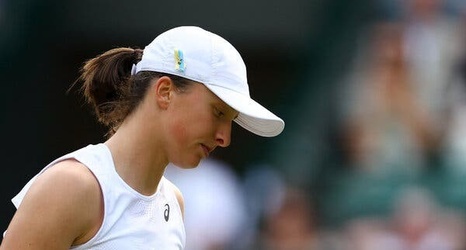 This article will be updated.

WIMBLEDON, England — Iga Swiatek, the world No. 1 and the top seed at Wimbledon, did something she had not done in more than four months Saturday. She lost a tennis match.

Swiatek, the 21-year-old two-time Grand Slam champion from Poland, lost to Alizé Cornet, the veteran Frenchwoman, 6-4, 6-2, ending her winning streak at 37 matches, one of the longest in modern women’s tennis.

Swiatek, though, did not lose the match so much as Cornet won it, emphatically even.

Playing with strapping on her left thigh, Cornet came out swinging hard, matching Swiatek’s power and taking advantage of the Polish champion’s discomfort on grass.