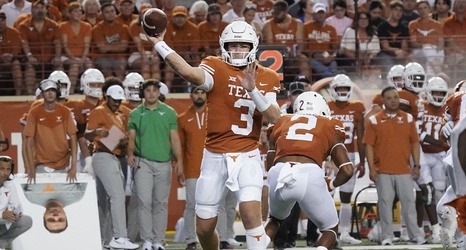 Texas coach Steve Sarkisian revealed Thursday that quarterback Quinn Ewers will travel and suit up for the Longhorns in their upcoming game against Texas Tech.

Sarkisian did not reveal who would start against the Red Raiders, per the Austin American-Statesman’s Brian Davis.

Ewers, who suffered a clavicle sprain in the Longhorns’ 20–19 loss to Alabama, has reportedly been progressing since the injury which was set to sideline him for 4-6 weeks. Davis reported Saturday the 19-year-old could be “back far sooner than people expect.