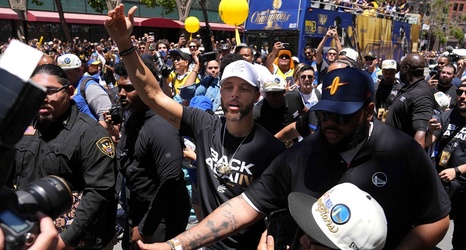 During Monday’s Warriors championship parade in San Francisco, one of the most awkward moments in recent memory was caught on camera.

Stephen Curry is one of the most recognizable and famous athletes in the world and along with that fame comes fans—some better than others. While taking pictures with some admirers, one woman attempted to cross the line and Curry quickly dodged a bullet.

A fan in a baseball cap puts her hand behind Curry’s neck and tried to give the four-time NBA champion a kiss. Before she could, Curry leaned back to avoid it and security was able to intervene to separate her.