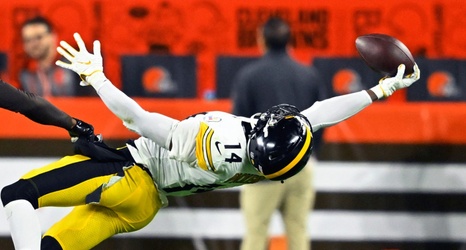 Steelers rookie George Pickens caught a pass from quarterback Mitch Trubisky with just one hand on Thursday night vs. the Browns.

The play wowed football fans, especially since the ball seemed nearly impossible to catch. Next Gen Stats reported that the pass had a 33.7% chance of being caught.

The 36-yard pass helped the Steelers move down the field and eventually score their first touchdown of the game, courtesy of Najee Harris.

Pickens’s highlight went viral on social media shortly after he completed the catch. Fans who watched the play live even went back to continue rewatching in disbelief.