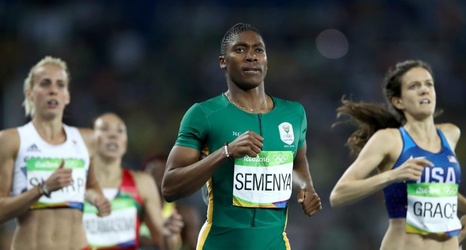 South Africa’s Caster Semenya won the women’s 800 meter final on Friday night at the Olympic Stadium in a new personal best and national record of 1:55.28, which is also the fastest time since 2008.

Burundi’s Francine Niyonsaba tried taking the lead with 300 meters remaining in the race but Semenya unleashed her kick with 150 meters to go and pulled away for the win. Niyonsaba settled for silver in 1:56.49.

Kenya’s Margaret Wambui set a personal best of 1:56.89 as she overtook Canada’s Melissa Bishop for bronze.

Semenya’s win is not without controversy as last summer, the Court of Arbitration for Sport suspended the "female hyperandrogenism" policy, which was adopted in 2011 by the International Association of Athletics Federations (track and field's governing body) and deemed high levels of natural testosterone as a competitive advantage.