Shaq and Chuck Wrestled On 'Inside the NBA' and It Was Hilarious: TRAINA THOUGHTS 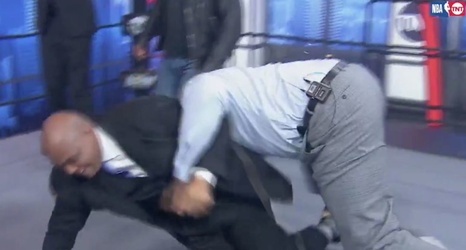 1. You never know what you're going to get from Inside the NBA, which is why it's regarded as one of the greatest, if not, the greatest, sports studio show of all time.

Last night, the crew treated us to wrestling and oral sex jokes.

AEW wrestler, Chris Jericho, joined Ernie Johnson, Charles Barkley, Kenny Smith and Shaq on Thursday's show for some cross-promotion since AEW airs on TNT. This led to Shaq basically assaulting Barkley while trying to show off his wrestling skills. In a matter of a minute, we had Charles begging Shaq for mercy, Shaq flipping around the ring like he was Daniel Bryan, Shaq dropping a horrible looking elbow, Kenny Smith diving on Shaq and Ernie Johnson whipping Smith into the ropes and then throwing him down

Seriously, though, we can all relate to Barkley here.