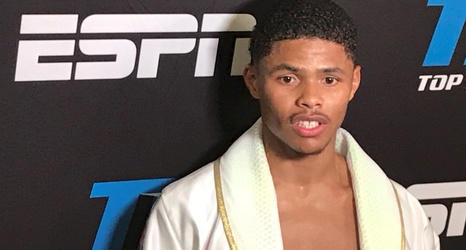 Rising star Shakur Stevenson announced Thursday his plan to move up in weight class after failing to make weight ahead of his scheduled title defense on Friday night.

The reigning WBC and WBO super featherweight champion had been set to defend his 130-pound titles against Robson Conceição (17-1, 8 KOs) at the Prudential Center in Newark, but was forced to vacate the belts after weighing 131.6 pounds during Thursday’s official weigh-ins.

Fight officials granted Stevenson (18-0, 9 KOs) a two-hour window to shed the weight but the Top Rank fighter refused, later saying in a tweet, “My health comes first,” before sharing he has decided to move up to the 135-pound division.