Second-Year Standouts: The Five Most Improved Sophomores in 2019–20 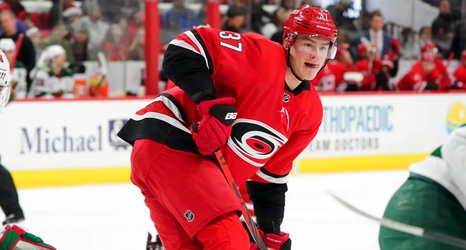 It’s been a crazy few months for Andrei Svechnikov in Carolina.

Last season, Svechnikov’s 20 goals and 37 points put him fifth in Hurricanes scoring and seventh among rookies league-wide, but he largely a forgotten freshman by the time the Calder Trophy votes were tallied, finishing seventh in voting and appearing on only 18 total ballots. But Svechnikov, the second-overall pick in 2018, has started to showcase why he was such a coveted prospect heading into his draft and why his modest rookie output wasn’t anything to be worried about.

Even ignoring his two highlight-reel lacrosse goals, Svechnikov has kept his name in the headlines for his stout play for a team on the playoff bubble that, if it had been healthy all season long, would likely already have secured a safe spot in the Metropolitan Division.