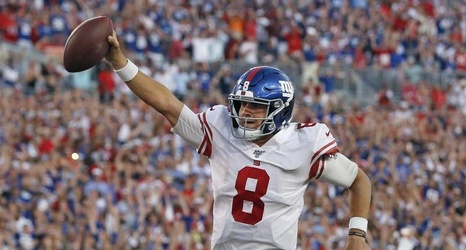 There's no time to watch one's mouth when directing a game-winning drive in a first career NFL start.

"[He] cussed one time," New York Giants wide receiver Russell Shepard said of quarterback Daniel Jones following the team's 32-31 win over the Tampa Bay Buccaneers on Sunday, per Ryan Dunleavy of NJ.com. "I ain't never heard him scream. He started screaming and cussing. We were in the red zone and he was like, 'Let's f--king score.'"

Jones finished an eight-play, 75-yard drive with a seven-yard touchdown run on 4th-and-5 with less than two minutes remaining.