Report: Rockets Deal With Nets or 76ers Could Culminate Quickly 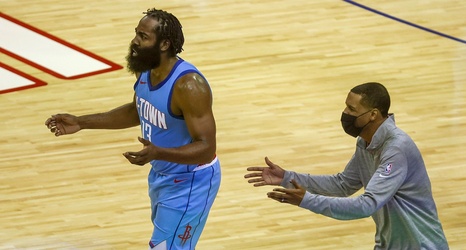 A possible deal involving Houston Rockets MVP guard James Harden going to the Brooklyn Nets or Philadelphia 76ers could culminate quickly, according to The Athletic's Shams Charania and Sam Amick.

The Athletic reports that Houston is currently sifting through offers from both of the teams.

Per The Athletic, the Nets have prepared a package that includes all of their four future first-round picks and three future pick swaps. FOX Sports' Nick Wright also reported the Nets are prepared to offer anyone that Houston wants aside from star forward Kevin Durant in exchange for Harden.

According to The Athletic, the Rockets have also explored a possible 76ers package centered on Ben Simmons.