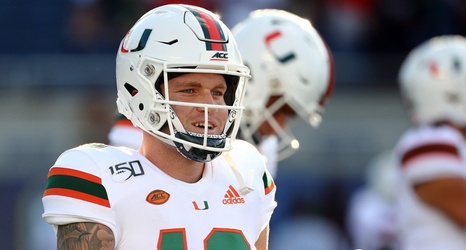 Miami quarterback Tate Martell has entered the transfer portal as a grad transfer, according to the Athletic's Max Olson and Matt Fortuna. The report was later confirmed by ESPN's Adam Rittenberg.

Martell was the nation's No.2 dual-threat quarterback according to 247Sports before he signed to Ohio State in 2017. He transferred to Miami in 2019 where he only saw action in five games with the Hurricanes and one seven-yard completion. He only appeared in two games in 2020 and didn't register a pass after D'Eriq King won the starting job.

Almost immediately after the reports of his entering the transfer portal came out, Martell posted a video on Twitter that featured the 5-11 quarterback training and vaguely talking about his journey but did not confirm or formally announce his transferring.