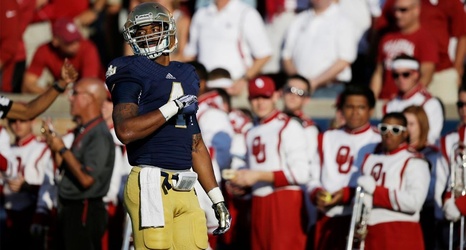 Former Notre Dame and NFL running back George Atkinson III has died at the age of 27, according to The Athletic’s Pete Sampson. No additional details have been released about his death.

Atkinson III is the son of former Oakland star safety George Atkinson, who was a member of the Raiders' Super Bowl XI championship team.

Atkinson III’s twin brother, Josh, died just over a year ago, and per Sampson, George has been dealing with depression since his brother's death.

The Atkinson twins played football together at Notre Dame and were members of the 2011 recruiting class.