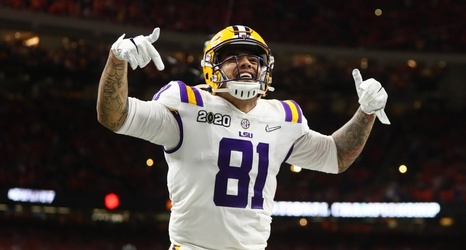 Former LSU tight end Thaddeus Moss's medical exam at the 2020 NFL combine revealed the tight end had a fracture in his right foot that will require surgery, according to ESPN's Jeff Legwold.

Moss, son of legendary NFL WR Randy Moss, went through the NFL combine's medical examination on Tuesday where doctors discovered he had a fracture to his fifth metatarsal bone. The recovery time for the expected procedure usually lasts between six to eight weeks, meaning Moss should be ready for the start of his rookie season.

The former Tiger is the No.