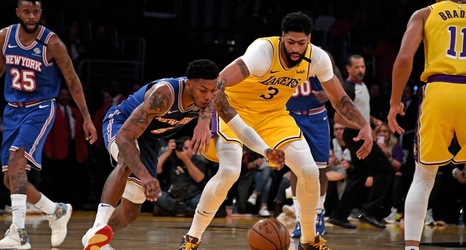 Anthony Davis will miss the Lakers' upcoming two-game road trip after injuring his back against the Knicks on Tuesday, according to ESPN's Dave McMenamin.

Davis hurt his back on a hard fall in the third quarter at the Staples Center. Los Angeles' big man attempted to block a layup attempt by Julius Randle, but Davis slipped and appeared to land around his tailbone.

The six-time All-Star was lying on the court for multiple minutes before gingerly walking off the floor. X-rays on Davis's back were negative, though he is sore, per The Athletic's Bill Oram.