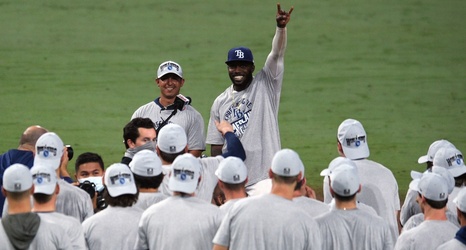 Randy Arozarena broke one MLB record during Game 4 of the World Series on Saturday night and is on track to tie another.

The Tampa Bay Rays outfielder hit his ninth homer at the bottom of the fourth, setting the record for most home runs ever hit in a single postseason.

He also has 25 hits during the playoffs and is one shy of tying that postseason record, which was set by Pablo Sandoval in 2014.

It's been a historic season for the rookie, who entered Saturday hitting .354/.425/.800 in 17 games this postseason. He surpassed Derek Jeter's record fr rookie hits on Friday during Game 3 with his ninth-inning home run, which also earned him his 52nd total base of the playoffs, breaking David Freese's record for the most in a single postseason.