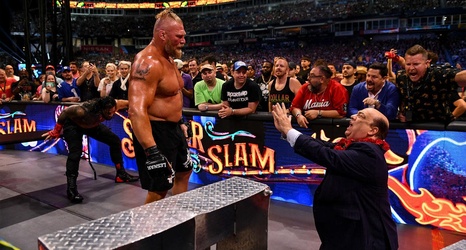 Brock Lesnar finally had the pleasure of exacting his revenge at SummerSlam.

A detailed, nuanced and action-packed storyline came to its conclusion on Saturday night, with Lesnar’s cathartic moment finally taking place when he forcefully slammed Paul Heyman onto the announcer’s table with an F5. Heyman was his longtime onscreen advisor (or, as Heyman would say, “advocate”). For years, if you saw Lesnar, the next person in your peripheral vision would undoubtedly be Heyman.

While they are still close behind the scenes, their on-screen narrative changed six months ago when Heyman pledged his allegiance to Roman Reigns instead of Lesnar.