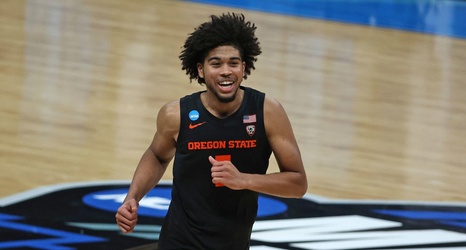 INDIANAPOLIS — UCLA’s Jules Bernard is a 73% foul shooter. With three seconds left in the Pac-12 tournament quarterfinals against Oregon State, Bernard went to the line for two free throws. If he made them both, the Bruins would win and the Beavers’ season would quietly end on a Las Vegas afternoon with a 14–13 record.

Bernard made one of two, sending the game into overtime. Once there, Oregon State prevailed, 83–79. The Beavers haven’t lost since.

These are the twists of March fate that can separate the magical from the mundane. A good foul shooter misses one, and suddenly a hungry team takes that crack of daylight and turns it into a sun-drenched run of historic proportion.