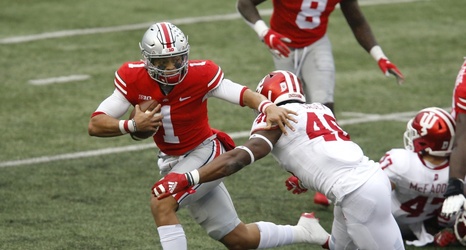 Ohio State quarterback Justin Fields entered the Buckeyes' game against Indiana on Saturday with no interceptions this season. Against Big Ten opponents, Fields had thrown only one interception in his career.

According to ESPN Stats and Info, Fields recorded his 11th game with both a pass and rush touchdown since the start of last season. Field's latest stat ties Clemson quarterback Trevor Lawrence for the most games in the FBS in that span.