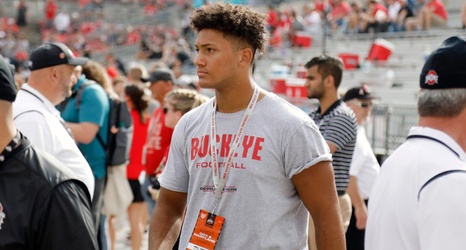 Will Smith played defensive end for Ohio State from 2000 to ‘03, winning a national championship and earning All-American honors at the program, before setting off on decade-long NFL career. Now, Will Smith Jr., son of the former Buckeyes and Saints star, will have the same college opportunity, should he so choose.

Upon the end of the NCAA’s recruiting dead period on Friday, the Buckeyes offered Smith Jr., a defensive end in the 2023 class. He currently stars at Dublin Coffman High School (Ohio).

Smith is still relatively early in his recruitment, but holds reported offers from Boston College, Duke, Georgia Tech, Illinois, Northwestern and West Virginia, among others.