Odell Beckham Jr. Hands Out Cash to LSU Players After Win over Clemson 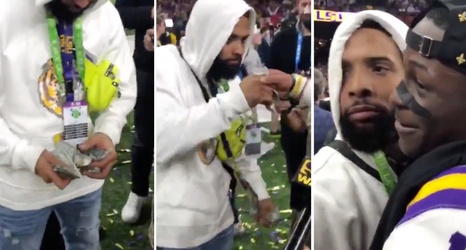 Former LSU star Odell Beckham Jr. was in a giving mood after watching his school take home the national championship on Monday night in New Orleans.

After the confetti fell on the field, Beckham was spotted handing out handfuls of cash to two Tigers players. The current Browns wideout pulled out a big stack of bills and peeled some off to hand to receiver Justin Jefferson and defensive back Jontre Kirklin. At least a few of the banknotes appear to be $100 bills.

Jefferson, whose brothers Jordan and Rickey played with Beckham at LSU, hauled in nine catches for 106 yards against Clemson.