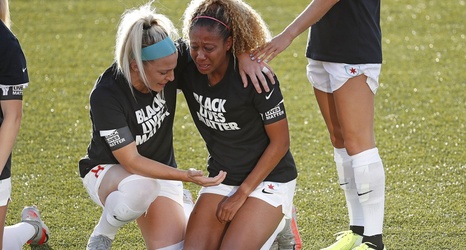 The NWSL announced on Monday it will allow players to stay in locker rooms during the national anthem before games for the remainder of the Challenge Cup.

The decision comes after several teams chose to kneel during the anthem over the weekend when the league returned. Both starting lineups for the Thorns and Courage, as well as the bench players on the sidelines, kneeled ahead of Saturday's Challenge Cup opener. Later, the Red Stars' Casey Short and Julie Ertz shared an emotional moment during the national anthem before their game against the Spirit.

The teams' choice to kneel comes after peaceful protests have occurred worldwide following the killing of George Floyd in late May.