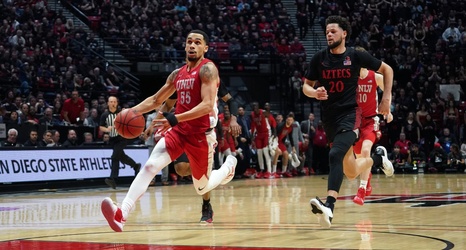 The No. 4 San Diego State Aztecs suffered their first loss of the season in a 66-63 defeat to the UNLV Rebels at home on Saturday.

The Aztecs entered the contest as the NCAA Division I's final undefeated team. The Rebels (15-14) halted San Diego State's 26-0 start, the fifth-longest season-opening win streak by an unranked team in the preseason poll.

After holding a 12-point lead at halftime, UNLV maintained its edge throughout the second half and grew its advantage to as large as 14. Elijah Mitrou-Long led the Rebels with 19 points off the bench.

The Aztecs cut the deficit to as little as one on a three-pointer with under 15 seconds remaining, but UNLV answered with free throws.