No. 4 Illinois Survives Scare From No. 13 Chattanooga 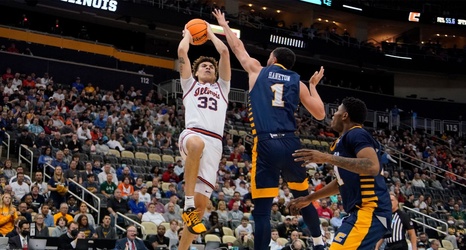 Illinois only led for 25 seconds and didn’t gain the lead until the final minute of regulation, but the No. 4 seed Illini survived a scare from Chattanooga 54–53 on Friday night in the first round of the NCAA tournament.

The Illini were thoroughly outplayed for the majority of the contest, trailing by double-digits and looking lost offensively for most of the night. But once it came down to crunch time, the talented Big Ten roster made the crucial plays to snatch victory from the jaws of defeat.

Trailing 51–50 with less than a minute to play, Illinois star big man Kofi Cockburn hit a short floater in the lane to give the Illini their first lead of the night with 46 seconds to play.