Nick Saban Calls Out 'Self-Absorbed' Alabama Fans: 'Have Some Gratitude' 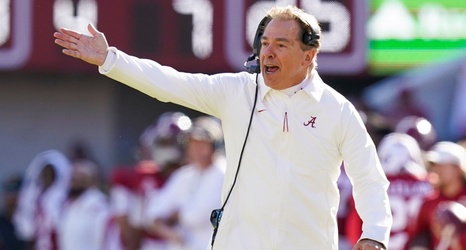 As No. 3 Alabama gears up for the Iron Bowl against rival Auburn, head coach Nick Saban had a message to what he perceived to be spoiled Crimson Tide fans: Be happy with winning.

Speaking on his weekly "Nick Saban Show" on Wednesday, Saban was asked a question about this year's Alabama team not blowing opponents out quite as much as teams from years past. The 70-year-old winner of seven national championships (six with the Crimson Tide) did not hold back in his reply.

“We played LSU, everybody says, ‘Oh, they’ve lost two games in a row, they’re not any good anymore, we’re just gonna blow them out.