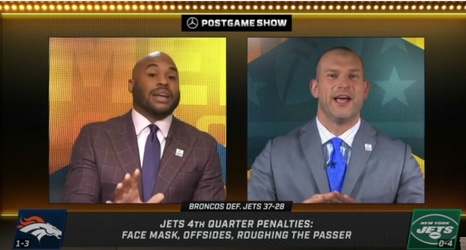 1. As they often do, the Jets once again embarrassed themselves on national television last night.

There are too many ways to describe just how they embarrassed themselves, but at the top of the list was the undisciplined Jets committing six personal fouls during the game, including a couple of roughing-the-passer fouls.

New York's dirty play led to Broncos coach Vic Fangio ordering his team (with colorful language) to skip any handshakes and hugs and get off the field immediately after the game.

This all struck a nerve with the NFL Network's Steve Smith, who went off on Jets defensive coordinator Gregg Williams during the postgame show.