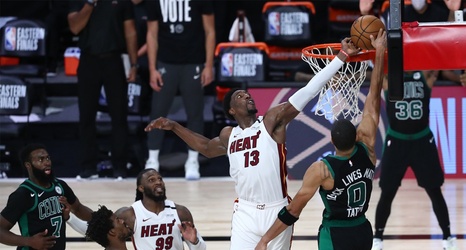 With the Heat leading by two points in the final seconds of overtime in Game 1 of the Eastern Conference finals, Celtics forward Jayson Tatum drove by Jimmy Butler and prepared to throw down a ferocious slam.

Tatum, however, was met at the rim by Heat forward and first-team All-NBA defender Bam Adebayo.

The block sparked a huge reaction from current and former NBA players, as many immediately called it the "dunk of the year."