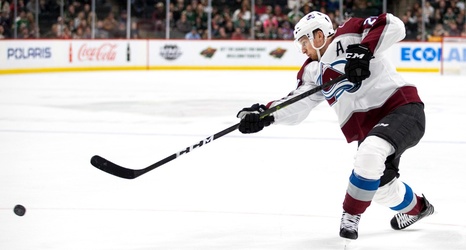 Long before he blessed Colorado Avalanche fans and cursed opposing goalies with his almighty scoring touch, Nathan MacKinnon was just another kid obsessed with working on his shot. “I started really young, probably 6 or 7,” the 24-year-old winger says. “A ton of pucks. Every day.”

At first he would practice in the garage of the family’s Halifax, Nova Scotia home with his father, Graham, but when that space became too cramped their sessions relocated to the driveway. This worked until the garage door was dented into a Mars terrain map thanks to all the wayward rubber, so one of his cousins, a carpenter, laid down some wood, plexiglass, and protective netting in the backyard, where Graham would string milk jugs to the goalposts and Nate would, as he puts it today, “try to smash them.