Minnesota's Rashod Bateman Re-Enrolls, Wants to Play This Season After Opting Out 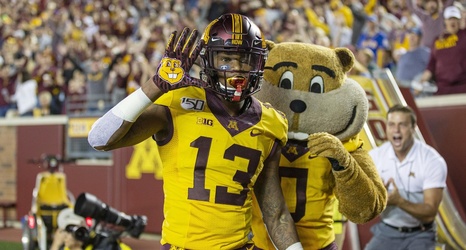 Minnesota wide receiver Rashod Bateman is looking to play with the Golden Gophers in 2020 after initially opting out of the season.

Coach P.J. Fleck confirmed in a statement on Friday that Bateman re-enrolled in school and received a waiver to practice with the team. However, the junior must be granted a second waiver to play in games this fall.

"Rashod and I have had many positive conversations since the Big Ten announced it was going to compete in football this fall," Fleck said in a statement. "Rashod initially opted out because of personal health concerns surrounding COVID-19, but now feels comfortable rejoining the team after the Big Ten announced the safety measures it was taking to protect student-athletes, which includes daily antigen testing.