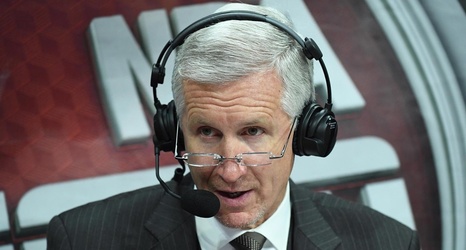 For the first time in his professional broadcast career, Mike Breen called a regular-season NBA game from home.

Over the past 29 seasons, Breen has provided play-by-play from a variety of different locations—most notably courtside during the past 15 NBA Finals, as well as in the since-removed lyric little radio bandbox atop the players tunnel at Madison Square Garden—though he had yet to do so from his basement. But that was exactly where Breen sat when welcoming viewers to the Celtics-Heat game last night on ESPN.

“Being away from the arena, it’s such a different kind of set-up,” says Breen, who called the game from his home in New York.