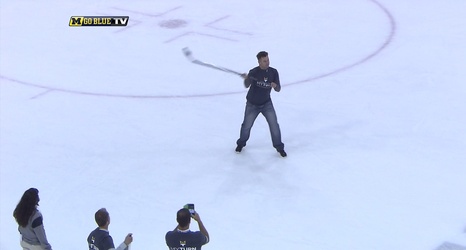 Twenty years after Mike Legg scored on a ridiculous hockey-style shot for the 1996 national champion Michigan Wolverines, he did it again.

Legg and two other members of that national championship team took the ice during the second intermission of Michigan’s game against Michigan Tech at Yost Ice Arena, and took turns trying some shots in Score-O.

After the first two scored using nearly the entire length of the ice, Legg stepped up and hit a bouncing lacrosse-style goal from long-range.

And, here are the three goals from the members of the '96 team.