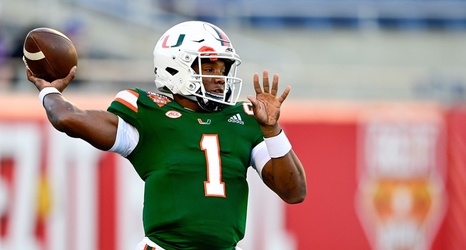 Miami quarterback D'Eriq King will undergo surgery after tearing the ACL in his right knee in the Hurricanes' 37–34 loss to Oklahoma State in the Cheez-It Bowl, the school announced on Thursday.

A timetable for King's return will be determined after surgery but he is expected to be available for the start of the 2021 fall camp in August.

King suffered the injury late in the second quarter of Tuesday night's game when he scrambled to his right and his knee buckled on the run. The redshirt senior stayed on the ground for several minutes before Miami's staff helped him to the medical tent.