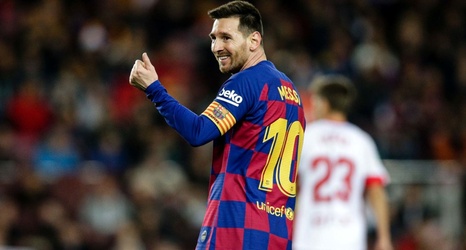 MADRID— It was showtime for Barcelona at Camp Nou Stadium.

Lionel Messi had a hat trick. Luis Suárez scored with a superb backheel goal. There was even an assist by goalkeeper Marc-André ter Stegen to Antoine Griezmann's first goal in six Spanish league matches.

With one of its best performances of the season, Barcelona cruised to a 5-2 win over promoted Mallorca on Saturday, keeping pace with Real Madrid and regaining the league lead.

Madrid had beaten Espanyol 2-0 earlier Saturday to provisionally move to the top, but Barcelona's win left the teams tied on points and the Catalan club ahead on goal difference.