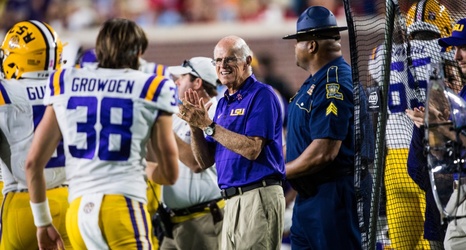 Sam Nader is in his 45th year as a member of LSU's football staff. During games, he watches from the sideline.

BATON ROUGE, La. — Will Muschamp is attempting to eat dinner while analyzing film of South Carolina’s next opponent, undefeated and No. 3-ranked Clemson, when he receives an interview request through text message. Few topics can take him away from football and food, but this is one. “You’re doing a story on Sam Nader?” says Muschamp, Carolina’s head coach and a former LSU assistant. “It’s about damn time someone did.”

You probably don’t know Sam Nader and maybe you’ve never even heard of him (that’s the way he likes it, honestly), but for more than four decades, Nader has labored in the darkness here at LSU, silently and diligently, unassuming and inconspicuous.